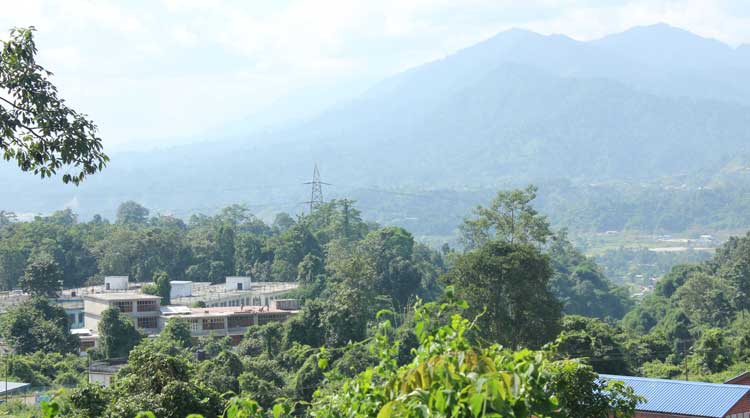 Rajiv Gandhi University (formerly Arunachal University) is the premier institution for higher education in the state of Arunachal Pradesh and has completed twenty five years of its existence. Late Smt. Indira Gandhi, the then Prime Minister of India, laid the foundation stone of the university on 4th February 1984 at Rono Hills, where the present campus is located. Ever since its inception, the university has been trying to achieve excellence and fulfill the objectives as envisaged in the University Act. The University got academic recognition under section 2(f) from the University Grants Commission on 28th March, 1985 and started functioning from 1st April, 1985. It got financial recognition under section 12-B of the UGC on 25th March, 1994. Since then Rajiv Gandhi University then Arunachal University has carved a niche for itself in the educational scenario of the country following its selection as a University with potential for excellence by a high level expert committee of University Grants Commission from among universities in India. The University was converted into a Central University with effect from 9th April 2007 as per notification of Ministry of Human Resource Development, Government of India.

The University is located a top Rono Hills on a picturesque tableland of 302 acres overlooking the river Dikrong. It is 6.5 km away from the National Highway 415 and 25 km away from Itanagar, the State capital. The campus is linked with the National Highway by the Dikrong bridge. The teaching and research programmes of the University are designed with a view to play a positive role in the socio-economic and cultural development of the State. The University offers Certificate Courses, Diploma, Post Graduate Diploma, Under Graduate, Post-Graduate and Ph.D. programmes. The Department of Education also offers B.Ed. programme. There are 45 (forty five) colleges affiliated to the University. The University has been extending educational facilities to the students from the neighboring States, particularly Assam. The strength of students in different Departments of University and in affiliated colleges has been steadily increasing.

The Faculty members have been actively engaged in research activities with financial support from UGC and other funding agencies. Since its inception, a number of proposals on research projects have been sanctioned by various funding agencies to the University. The various Departments regularly organize Seminars, Workshops and Conferences. Many faculty members participated in national and international conferences and seminars held within the country and abroad. Eminent scholars and distinguished personalities have visited the University and delivered lectures on various disciplines.

The academic year 2000-2001 was a year of consolidation for the University. The switch over from annual to semester system took off smoothly and the performance of the students registered a marked improvement. Various syllabi designed by Boards of Post-Graduate Studies (BPGS) have been implemented.

In spite of infrastructural constraints, the University has been maintaining its academic excellence. The University has strictly adhered to the academic calendar, conducted the examinations and declared the results in time. The students from the University have found placements not only in State and Central Government Services, but also in various institutions, industries and organizations. Many students have come out successful in the National Eligibility Test (NET). Since its inception, the University has made significant progress in teaching, research, innovations in curriculum development and developing infrastructure.